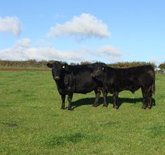 THORNE'S BUTCHERS was started up in July 1979 by Michael Thorne and his wife Rosemary. Michael came from a butchery background and Rosemary from a farming background, when they took over the closed shop in West Street, Wiveliscombe. Initially Rosemary’s late parents supplied the shop with beef and lamb. Nowadays, eldest son Rodney and his wife Fiona are the principle supplier of lamb and beef for the shop. They lamb and calve their own Sheep and Cows, farming in a most beautiful part of West Somerset only a few miles from the shop, giving the shop traceability of naturally fed beef and lamb from birth to plate.

Keeping up the standard of their own beef and lamb outdoor reared pork is sourced from a local Farmer. Also available is free range poultry and eggs, and a wide selection of cheeses. Cooking hams, cooked meats, pies and pasties, making all their own sausages and burgers on the premises all enables them to give a special display of choice at a very competitive price. They are honoured to have so many loyal customers, and specialise in over the counter trade.

Thorne's Butchers were proud to be Award Winning Butchers, being anonymously voted as one of the top 100 shops in the World to visit in 2006, the publicity from this award led on to the shop being awarded Best Rural retailer.

In 2014 they were also awarded Somerset Life's Food and Drink Best Butcher of the Year.